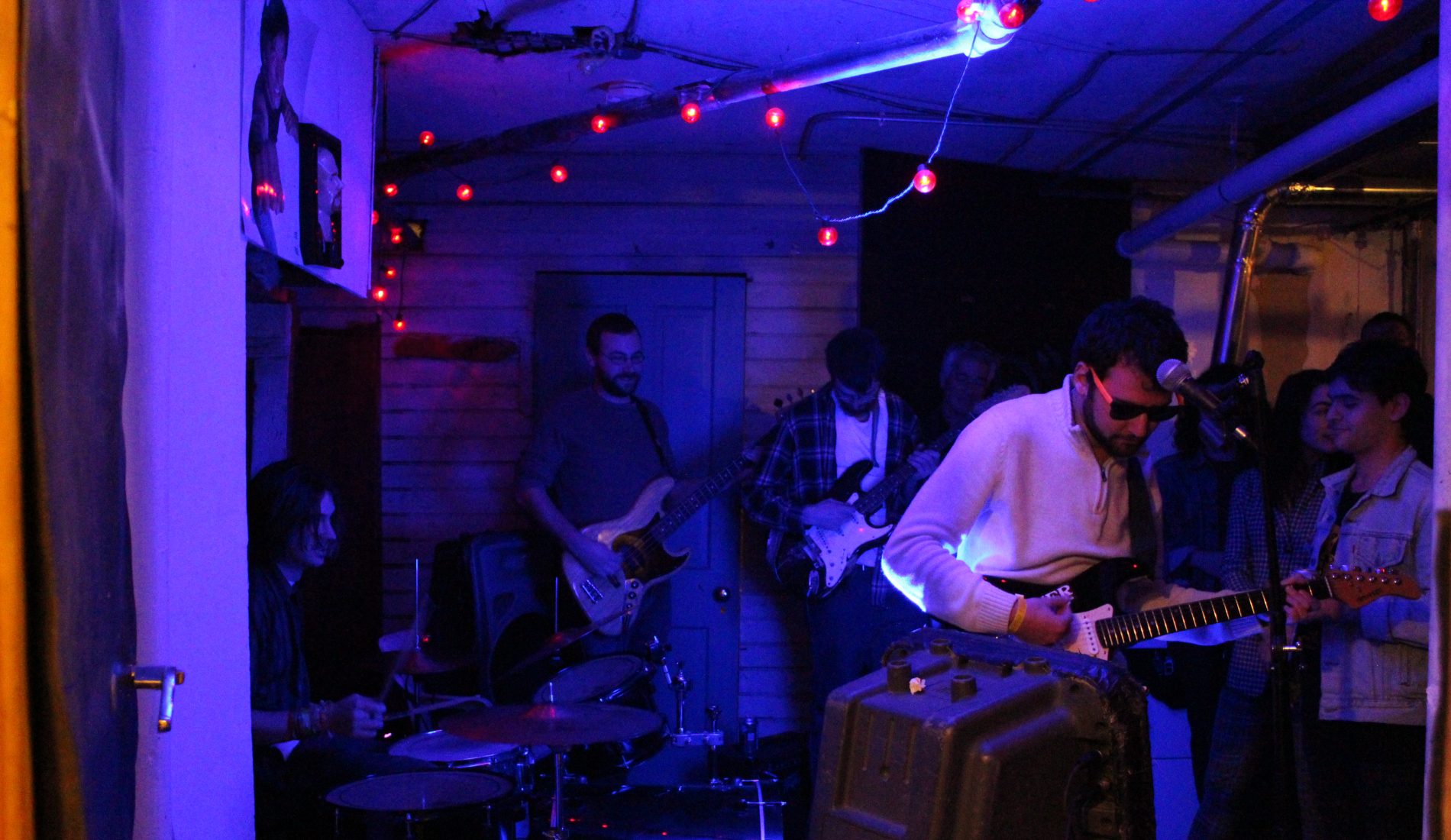 Uneven, poorly-lit steps lead into a dingy space where the only light is from a small lamp behind the drum set and some Christmas lights. This is the Farm, one of several Allston, Mass. illegal music venues throwing house shows in the basements of their rented space.

The Farm is a relatively new house venue. Martin Aucoin, who lives in the house, said that he and his five roommates moved to Allston in September and have thrown concerts in their basement ever since. He said the shows usually don’t end up hosting more than 30 people, and that they’re typically catered to “niche” genres such as punk and noise rock.

One of the bands featured at the show we attended is G Gordon Gritty, and Glen Maganzini is the frontman.

Though Maganzini is from Wakefield, Mass., he helps with booking shows at the house. When asked if he personally was trying to foster a subculture community, Maganzini expressed some frustration with the state of Allston’s basement show scene.

Maganzini questioned if both bands and college students who attend the basement shows attend for the what he considers the “right” reasons. “I always thought basement shows were for the weirdo people, people who were doing things a little differently.”

According to Maganzini, there are a lot of bands studying music at Berklee College of Music who are jumping at any chance to play a basement show and build a following. To Maganzini, he sees basement shows as a place for bands whose sound may not be appreciated at a bar or venue- and isn’t crazy about the idea of “mainstream” artists being on the scene as a step towards fame.

But everyone who’s been in the Allston basement scene is on the same page.

Robbie Wulfsohn is the lead singer of Ripe, a band who started out playing basement shows while attending Berklee. His views on the community couldn’t be any more different.

Wulfsohn explained that performing in basement shows helped Ripe build a following and improve as a band with larger aspirations. He said the word-of-mouth nature of the community certainly benefited the band.

For him, the basement community was overwhelmingly positive. He sees the scene as a place where people can meet new friends in an environment that isn’t easily replicated. It was the place where they were able to grow as a band, iron out the kinks, and eventually grow to a point where they were playing formal venues. In short, they made it out of the basement.

This past July, Ripe played the Levitate Music and Arts Festival, and they have sold out venues all across the country. Ripe has shared the stage with large, nationally touring acts including Dispatch, Ziggy Marley, and Umphrey’s MgGee. On February 23 and 24, Ripe will play Boston’s Paradise Rock Club for two nights in a row.

G. Gordon Gritty continues to play basement shows and the occasional small Boston venue. Most of his fans find out about gigs through Facebook and word-of-mouth.

Both frontmen seem to be living the experiences that they’ve set out to have, and they both have Allston’s basement concert scene to thank.